Saturday – more housework! After cleaning various things this morning I got stuck into writing some new Irregular Webcomic! scripts. I want to get another batch made next week if I can, and then complete another batch before I leave for my trip to Germany at the end of October. I wrote about half the batch today – hopefully I’ll have time to finish it off tomorrow.

It was approaching lunch time and I was getting hungry, so I checked the kitchen. We had 2/3 of a loaf of bread bought from the supermarket on Thursday, so I planned to make myself some sandwiches. I grabbed the bread… and noticed that the plastic bag had a large hole in it at the bottom end. Ragged, like it had been torn open. And a big chunk of the bread inside the hole had been… eaten away. It looked like mouse or rat damage.

Now I’m pretty sure we don’t have mice in the house, and we store the bread under a plastic cake cover so there’s no way anything could get in. So this must have occurred at the supermarket, and we just didn’t notice it until now. My immediate problem was that this left me with nothing straightforward to eat for lunch. (I wasn’t going to eat slices of a loaf that’s had mice/rats chewing on it.) So I took the rodent-gnawed loaf and went for a walk up to the supermarket to exchange it, and to buy some lunch on the way. I got sushi. The supermarket exchanged the bread for a new loaf with no issues, and the woman I spoke to said she’d show the damaged loaf to the manager.

This afternoon: more comic writing, distracted a bit by wondering if I have a Lego Boushh or not, and how much it would cost to acquire one (about $35 it turns out – too much for one comic). Then I watched Australia’s first game in the Rugby World Cup in Japan, as they played against Fiji in Sapporo. Fiji got off to a good start and led the scoring until the 62nd minute, when the Aussies finally pulled ahead – and from there the Fijians were visibly fatiguing while the Aussies stormed all over them, scoring multiple more times to win comfortably in the end. Our next game is against Wales next weekend.

After the game my wife and I took Scully to the park for some exercise. We’re trying a new training treat: tinned salmon, which she gets a morsel of for successfully responding to our call to “come here”. She obeys that one reasonably well, but not if she gets distracted by something, so we’re working on strengthening it. The good news is she likes the salmon, and was very keen to “come here” to get some.

This evening I played some games of Codenames Duet with my wife. We lost the first game when I guessed an assassin card. Here’s the layout midway through the second game, where we’re going better: 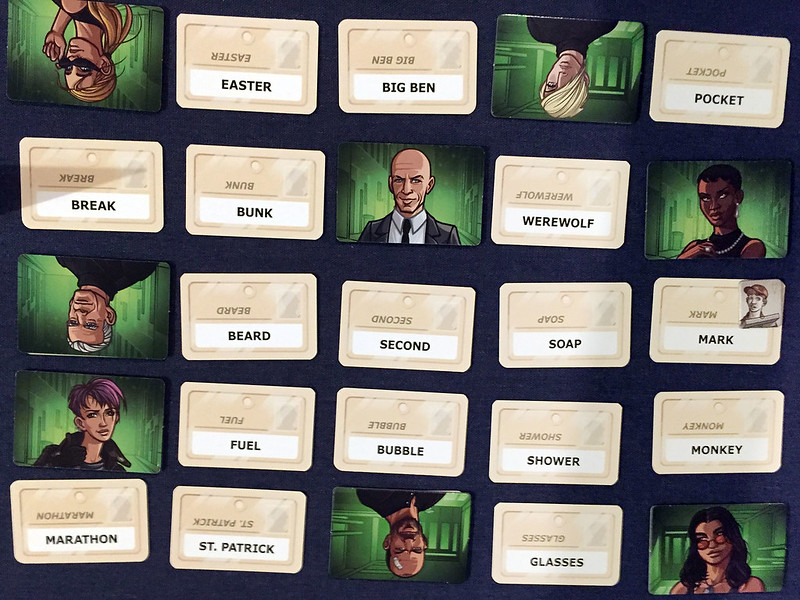 At this stage I had to clue to my wife MARATHON, ST PATRICK, WEREWOLF, and MONKEY. I considered “hairy” for WEREWOLF and MONKEY, but was stymied by the presence of BEARD. I plumped for “person” to clue ST PATRICK and WEREWOLF, which thankfully worked, and after that it was all downhill to the finish, as we won it handily. So 1 loss, 1 win.