Today was spent getting used to my new tooth, and also in doing some comics work. I assembled a new Darths & Droids strip for Sunday’s update, and then wrote a bunch of new Dinosaur Whiteboard comics for the first time in six months. It’s funny how having more spare time means I’ve had less time to spend making those. Anyway, I’m hoping to keep those up 5 days a week for a while again.

I did some admin work involving contacting my mother’s ISP to sort out some account stuff for her. Then went out for lunch and to buy some groceries to lead into the weekend.

Tonight was fortnightly games night with friends. Five of us gathered at Steven’s place, and we kicked off with a Darths & Droids writing session, titling the strip I’d made this morning and then writing new strips. After we did that we got stuck into games.

I played a couple of quick games of Rubik’s Race, which was really only there because Steven has primary school aged children. It’s nowhere near as difficult as a Rubik puzzle, and is essentially a simple sliding tile puzzle that is played as a race between two players.

After pizza we got stuck into a serious game: Architects of the West Kingdom. This is a worker placement game, in which you have 20 meeples and each turn you place one on the board in a location of your choice, and then depending on the location you perform an action per meeple that you have at that location. Some locations simply give you resources, while at others you spend the resources you have to buy artisans, or build buildings. There are also some actions that interact with other players’ meeples, such as capturing them, or ransoming them off to the prison tower for money. You gain virtue for doing virtuous things, such as building the cathedral, giving goods to the king, or paying off debts, while losing virtue for things like raiding the tax store, or visiting the black market to secure a better trade deal.

Here’s the game partway through. I’m playing red, with my supply on the far side of the board in this view: 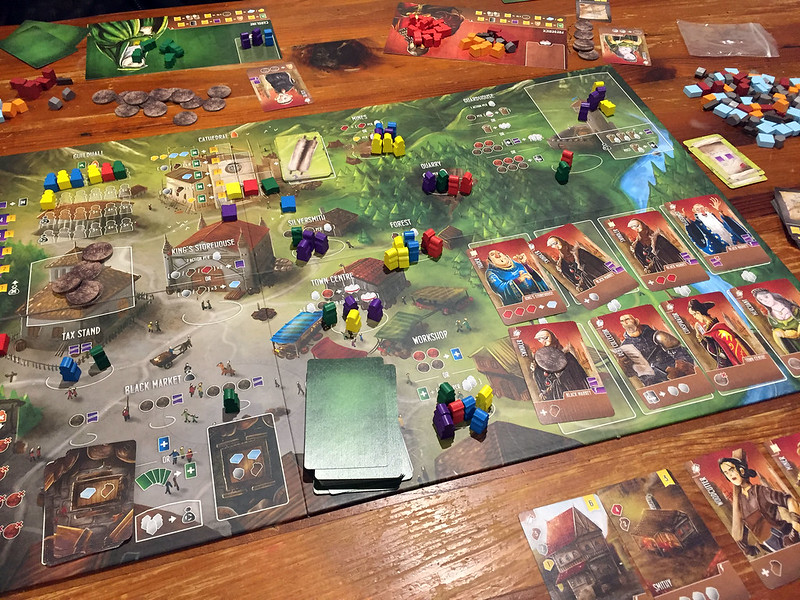 It’s really engaging because each turn is only a few seconds long and your turn comes around again quickly, so it always feels like you’re doing something, rather than waiting for your turn. You get victory points for buildings, gold, marble, coins, virtue, having built parts of the cathedral, and also any bonus points on cards you may have bought during the game. So there’s a lot of variety in ways to accumulate points, and thus a lot of different strategies that you can use that feel like viable ways to winning. All these are good features, and it’s a fun game. As it turns out, I won with 34 points! The next player had 30.

If you’re looking for a good new game that supports up to five players, I recommend it.