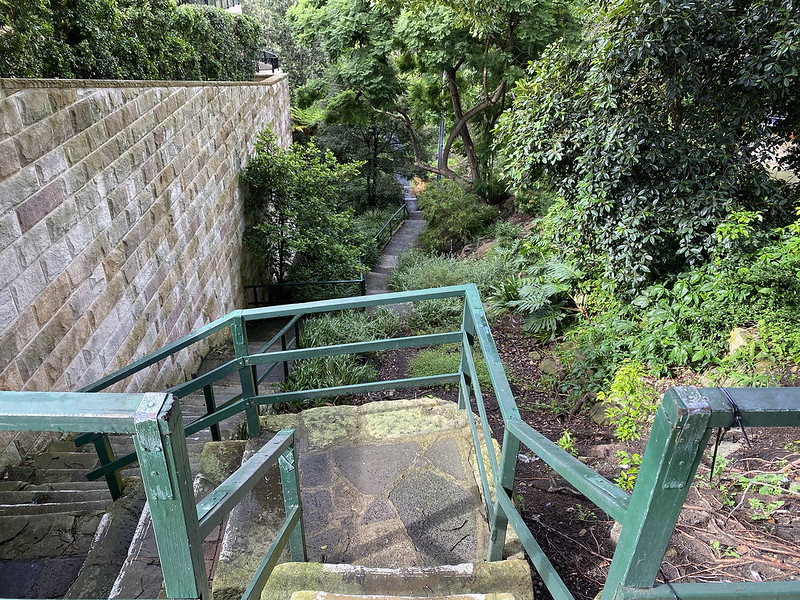 We start this walk at this set of steps leading down into a gully. This is Meadow Lane, in the suburb of Wollstonecraft. Although named as a Lane, it's simply a pedestrian path. For the first part of this walk we're heading south. 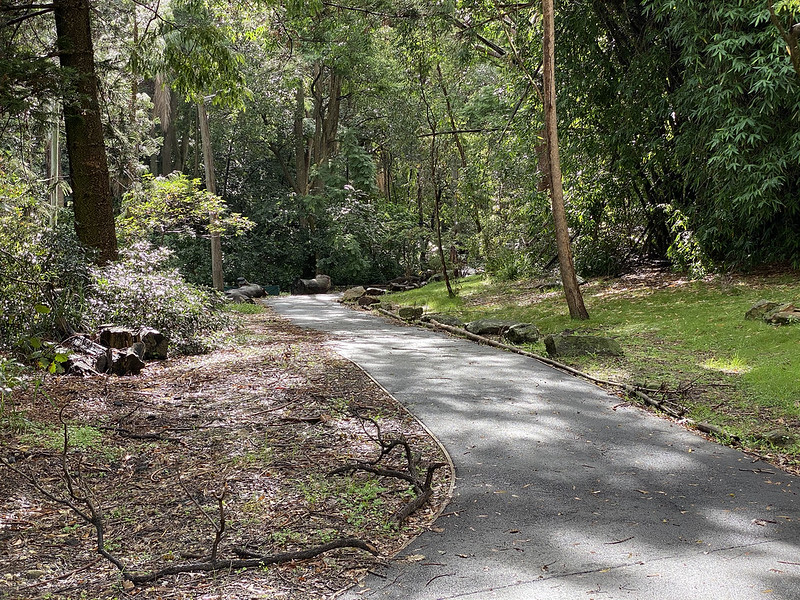 Meadow Lane leads to Harry Howard Reserve, a small green space nestled between suburban streets at the bottom of this creek gully. This is the view up the gully to our left, up Newlands Lane, one of the three pedestrian paths that lead down here. However we continue across the gully and up the steep hill on the other side, which is Ivy Lane. 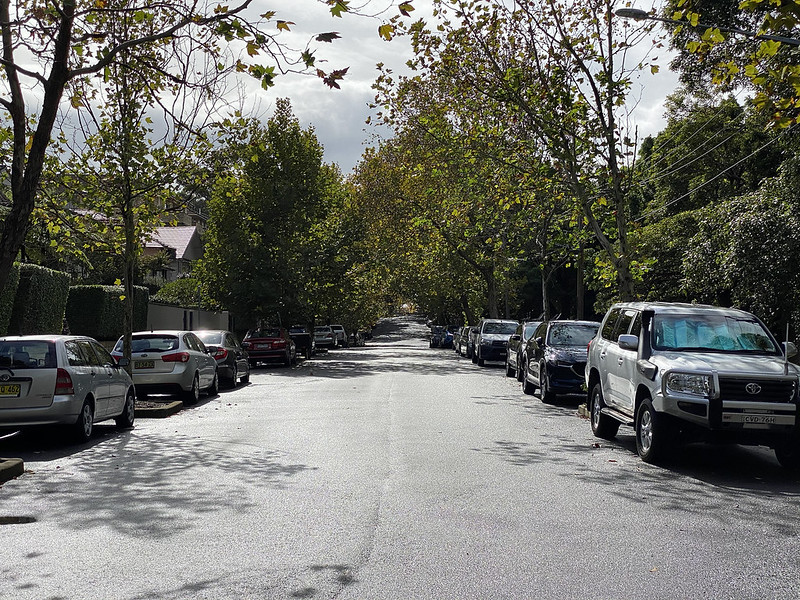 Ivy Lane leads up to Ivy Street and then to Hazelbank Road. This view looks up the hill to the east from the bottom end of Hazelbank. 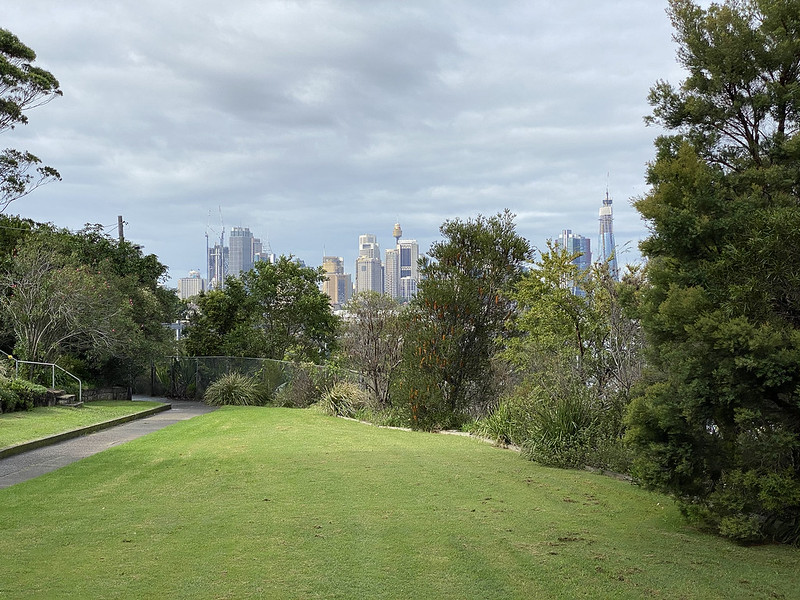 From there we cross into the suburb of Waverton and head towards Waverton train station, where we pick up this pedestrian path that begins adjacent to the station. The train tracks run just behind and below the screen of foliage running from the foreground right to mid-ground left. You can see one of the overhead wiring support pylons through the trees at left.

In the distance we have a view of the central business district of Sydney. Those buildings are across on the southern side of the harbour - you can't see the intervening water in this photo. 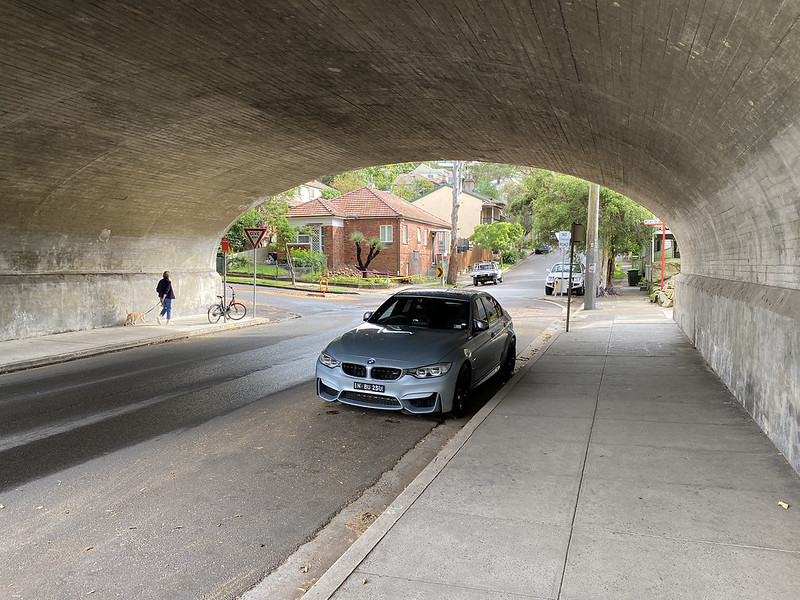 The train line curves around to the east. We turn right and take this tunnel underneath the train tracks to continue heading south. This street is Euroka Street. Out the other side of the tunnel we emerge into the next suburb of McMahons Point. 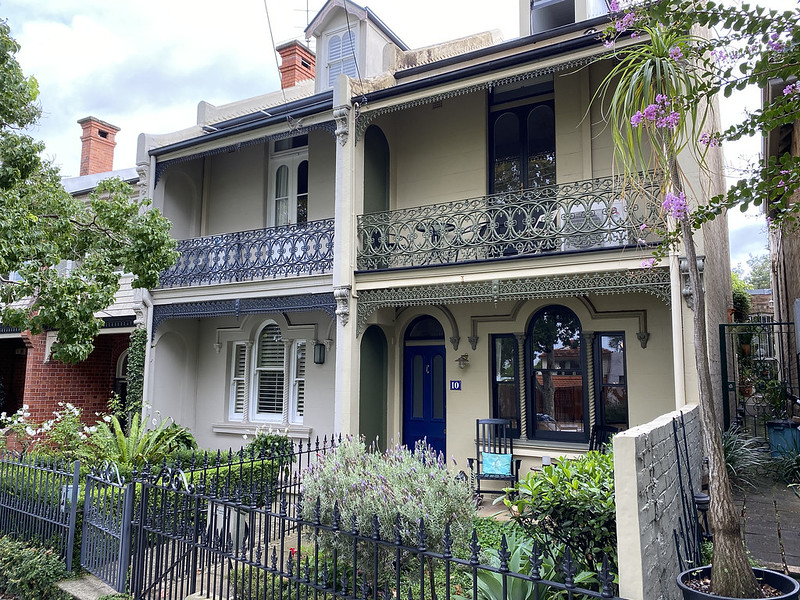 Through the tunnel, on the south side of the railway line, we turn east ourselves onto Union Street. There are many lovely old Victorian terrace houses along this street, mostly kept in good condition. I love the wrought iron latticework. 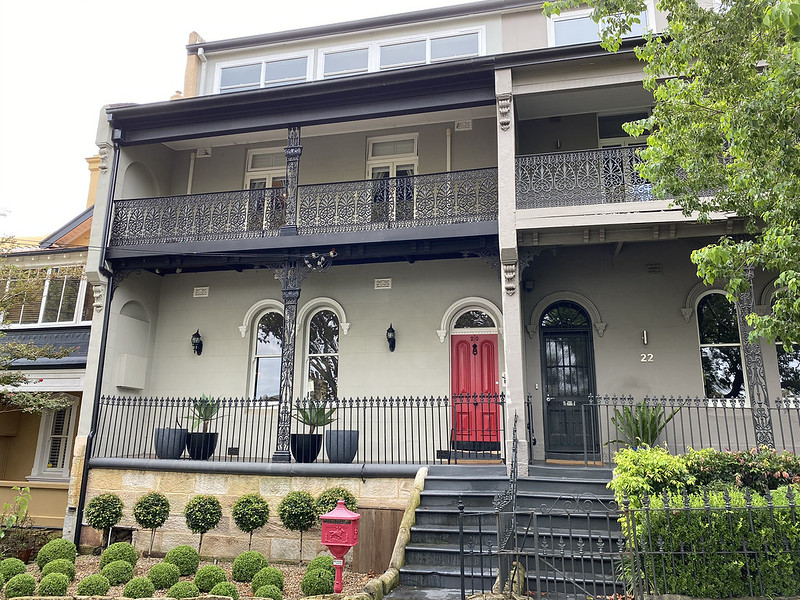 More beautifully maintained terraces. I like the red door and matching period mailbox. There are thousands of these Victorian terraces all over Sydney, but most not in as good condition as these. 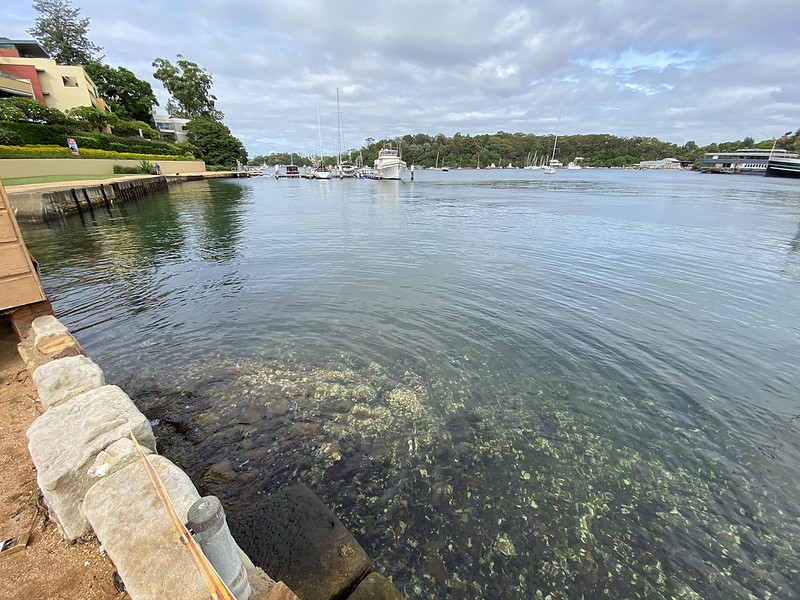 We've turned south again down Dunbarton Street and emerged on the shoreline near the boatbuilders' workshops on Berrys Bay, an inlet of Sydney Harbour. The boatbuilders are behind us in this photo, which looks south along the shore of the bay. 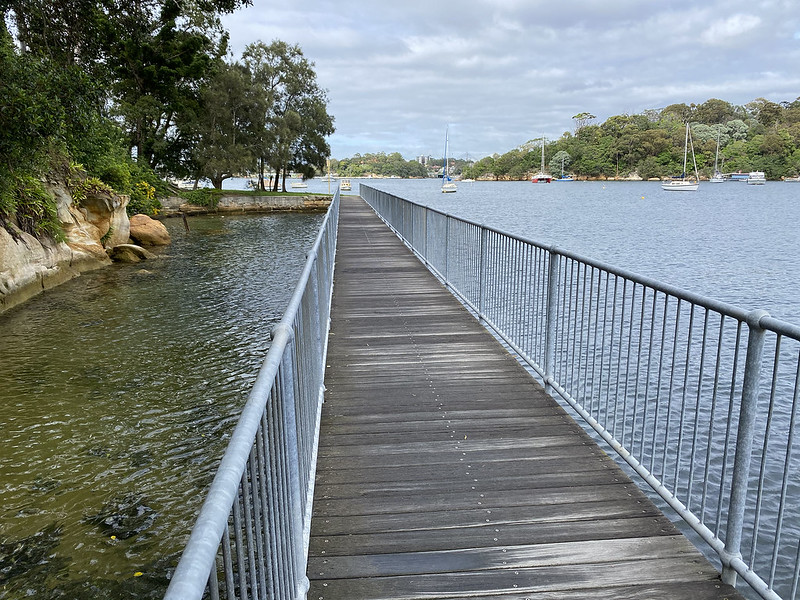 Between here and our next destination there is private property along the shorelines. But never fear, for there is this cool public walkway built out over the water to join the two pieces of public land that are separated by houses. That little bit of grass we're heading to is the corner of Sawmillers Reserve. 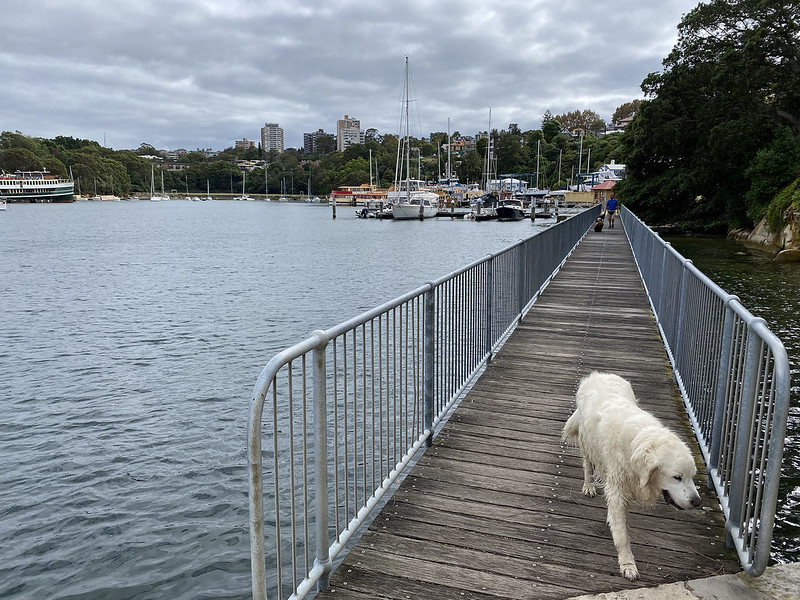 This shot is looking back from the far end of the walkway, north towards the boatbuilders' workshops, where a lot of boats are moored. This guy was walking a small posse of friendly dogs. 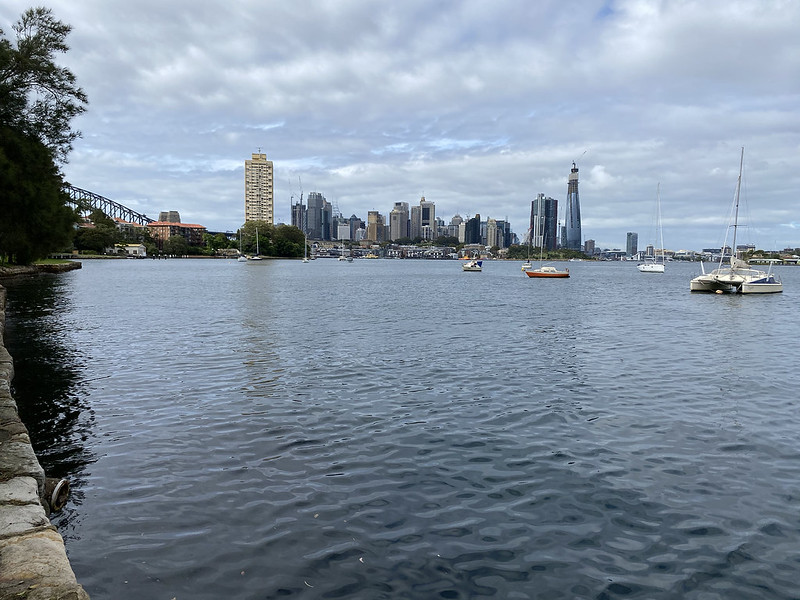 This is the view of the city from this end of Sawmillers Reserve. You can see the arch of the Harbour Bridge that connects it to the northern side of the harbour, where we are now.

Sawmillers Reserve is a narrow strip of grass running along the shoreline, backed with dense trees set back from the water. The whole park slopes down to the shoreline. I didn't actually get a photo of the main part of the park itself, but in this shot you can see the grass running along the shore on the left as far as that squat white building. Sawmillers Reserve is named for the old sawmill that used to be on this land. 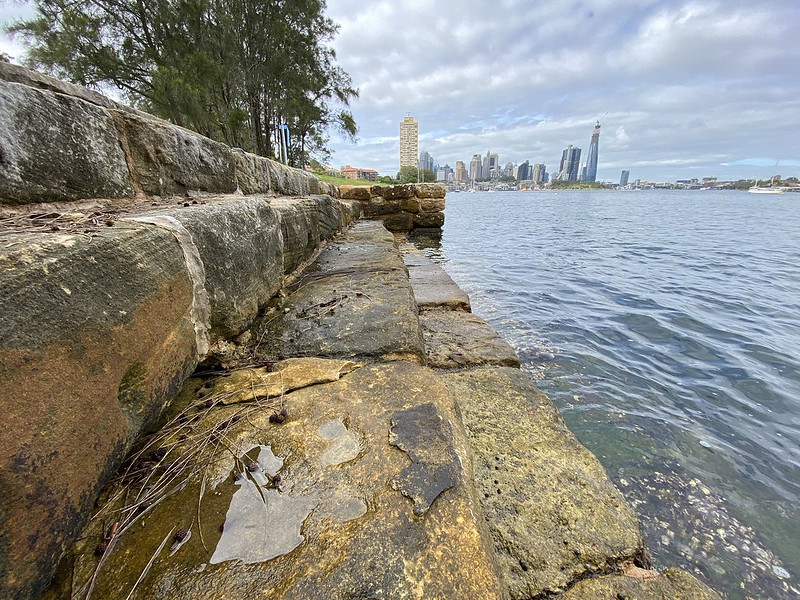 There are some old sandstone steps here leading down into the water, no doubt originally built to allow people to board and alight from boats. On the first submerged step you can see some of the famous Sydney rock oysters. They grow all over the harbour - although ones for eating are grown elsewhere where the water is cleaner.

A panorama of Balls Head Bay from Sawmillers Reserve. Berrys Bay is the smaller cove on the right.

The sandstone steps in the previous photo are along the shore on the far right. On the far left you can see our next destination, just behind those trees nearest the water... 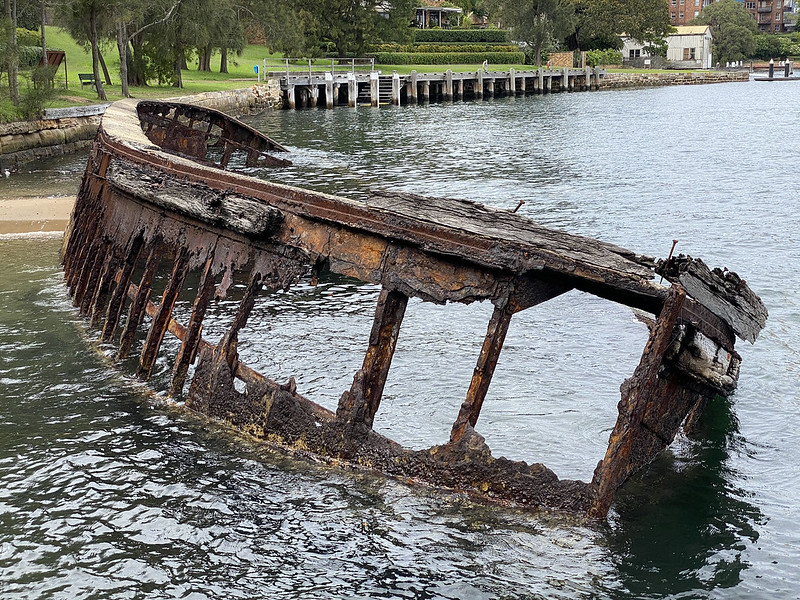 There's an old shipwreck here! It's a Maritime Services Board hopper barge. According to the New South Wales Office of Environment and Heritage, this particular wreck is a barge of unidentified registry, of a type common to Sydney Harbour, mainly used for carrying dredging spoil. 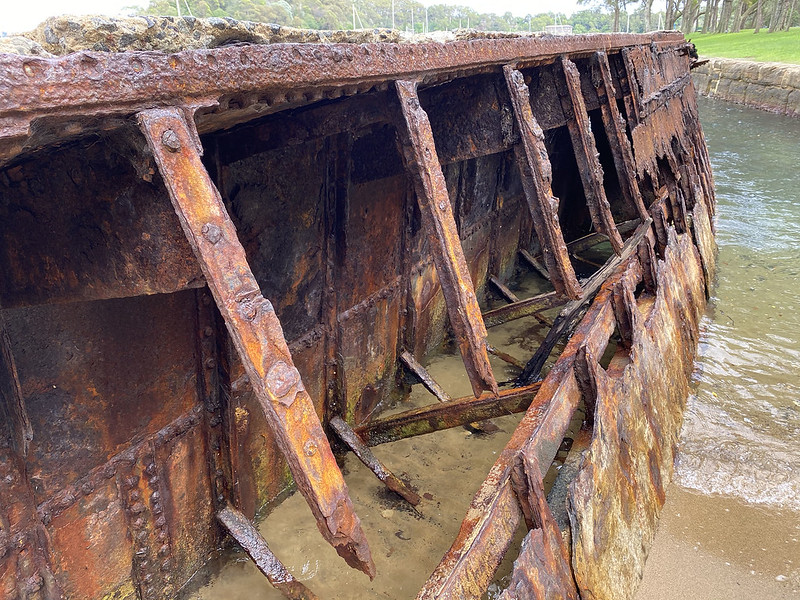 At the current tide level, there's a small exposed spit of sand connecting the barge to the nearby shore, and you can walk down and right up to it. 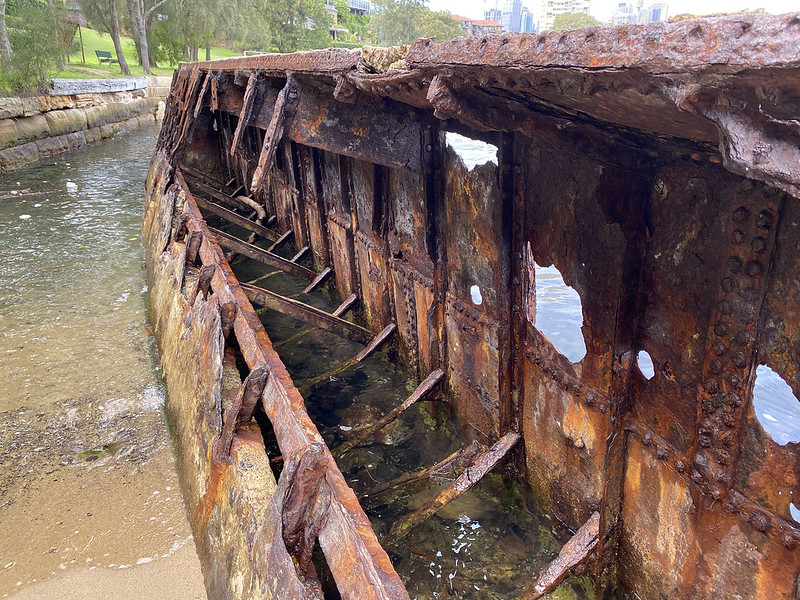 It's pretty rusted and decrepit, but a cool piece of the local history of this area. This wreck is a protected historical site under the NSW Heritage Act of 1977.

And a final view of the barge from the other end. 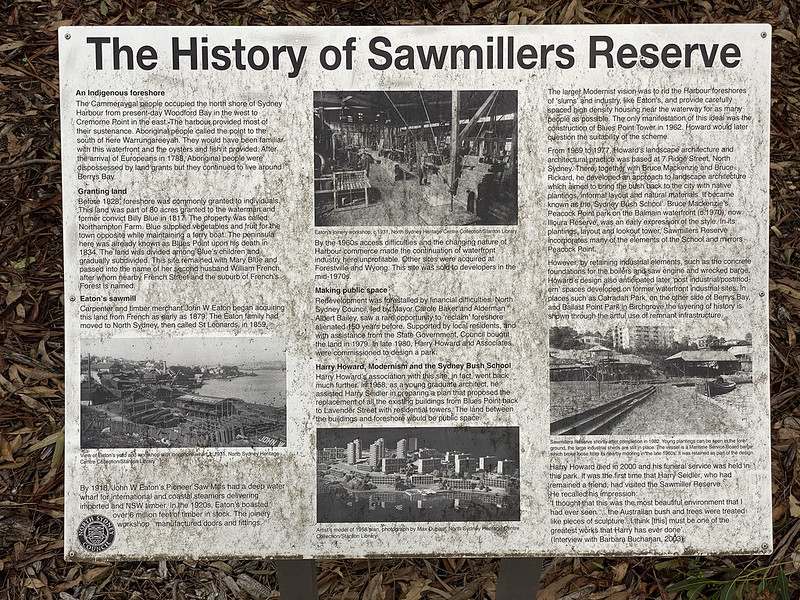 In the park there's an informational plaque about the history of the land where Sawmillers Reserve now sits. TL;DR: A sawmill operated here from 1918 to the 1960s. There were then plans to develop the site into a mass of apartment blocks, but good sense won out and the area was dedicated as a park instead. 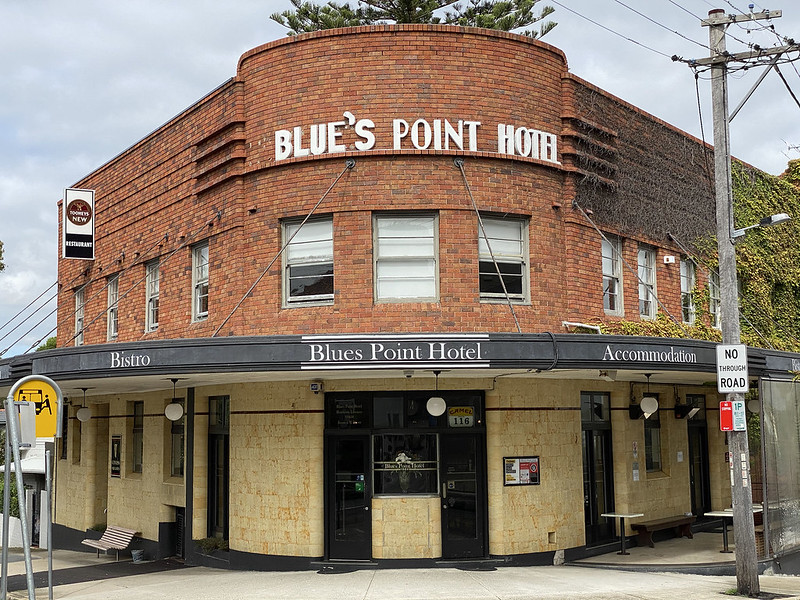 From the Reserve we walk uphill along French Street to Blues Point Road. Here is the beautiful old Blues Point Hotel, built of brick in a restrained Art Deco style. It was built in 1938-39, and is listed as a building of historical significance. In 1939 the original Art Deco lettering read "McMahon's Point Hotel", but the "McMahon's" was replaced with "Blue's" in 1973, thus the mismatch of lettering styles.

Blues Point is a commonly used alternative name for the headland of McMahons Point. You'll notice that place names in Australia don't have apostrophes in them - that's an official 1966 decree from the Geographical Names Board: place names never have apostrophes in them, even if derived from a posessive. However the signage on the Blues Point Hotel pointedly ignores this decree, so retains its original apostrophe. 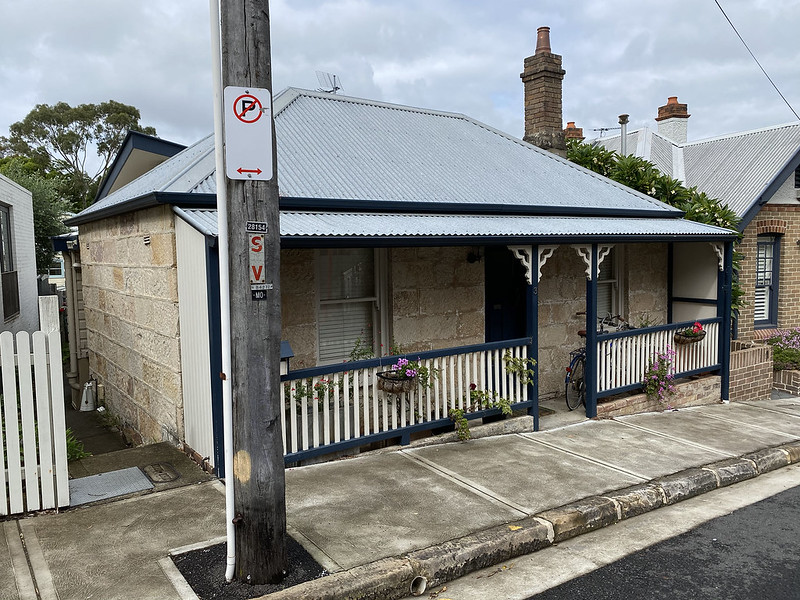 Rather than walk along Blues Point Road, I turn and head northwards for home, taking Queens Avenue via Mil Mil Street. At the corner of Mil Mil and Queens is this old sandstone cottage. There are hundreds of old sandstone buildings like this scattered amongst more modern houses in various suburbs of Sydney, the last remnants of the earliest settlers in these places.

Rather than walk along Blues Point Road, I turn and head northwards for home, taking Queens Avenue via Mil Mil Street. At the corner of Mil Mil and Queens is this old sandstone cottage. There are hundreds of old sandstone buildings like this scattered amongst more modern houses in various suburbs of Sydney, the last remnants of the earliest settlers in these places. 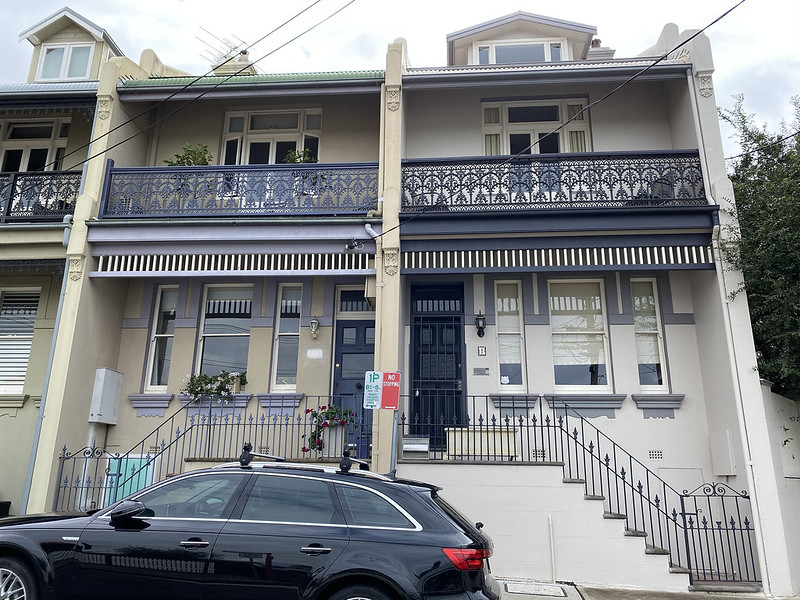 The Victorian terraces such as those to be found right across the street are newer than the old sandstone cottages. 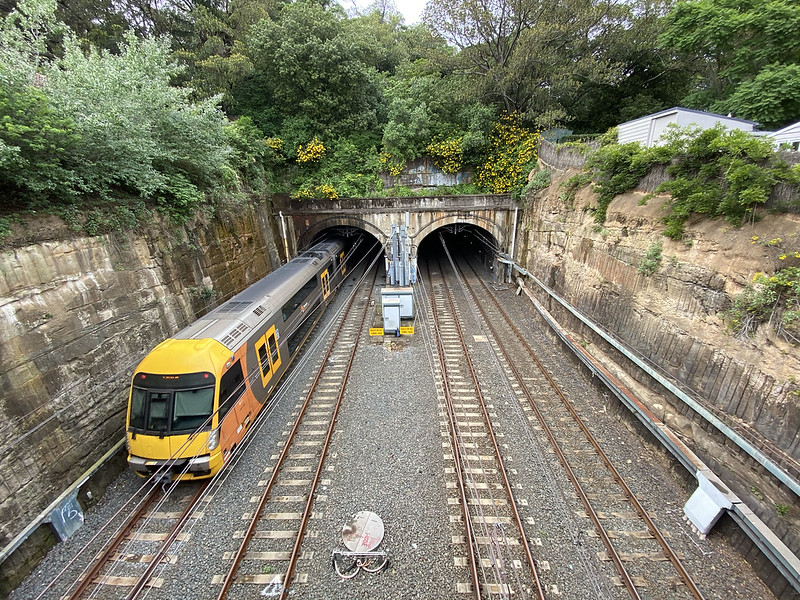 The last photo on this walk is in Bank Street, back in Waverton. This street passes over the train line, not far from where we walked under it earlier. It really is very hilly around here! 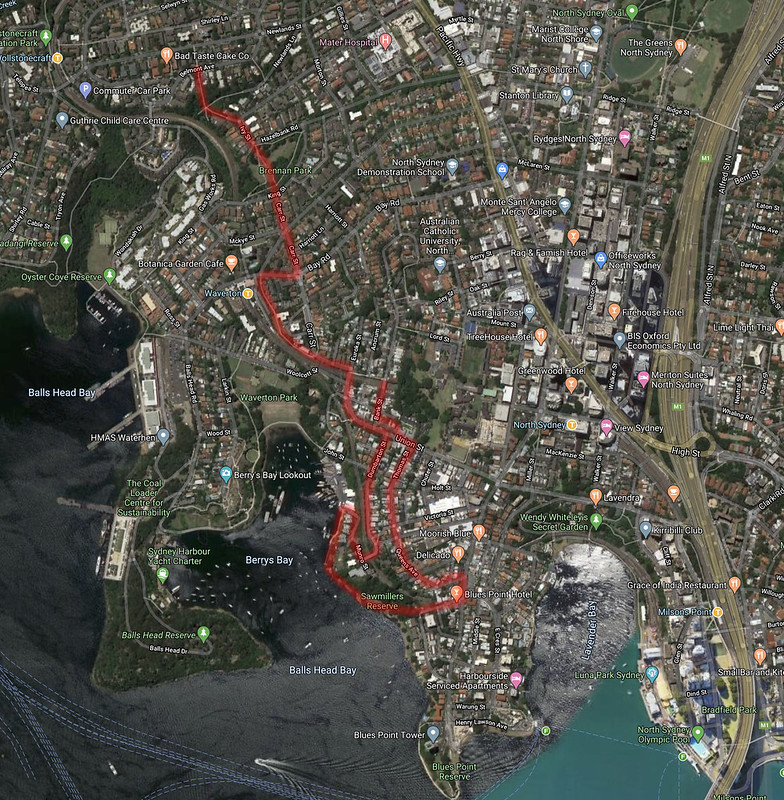 Map of this walk. The photos are from this segment of a longer walk, starting at Belmont Avenue, top, and ending at the rail bridge on Bank Street. Sawmillers Reserve and the Blues Point Hotel are labelled at the bottom of the walk route.