Today was my visit to the primary school where I talk to the kids about science stuff. I had three separate session with kindergarten, Year 1, and Year 2. As mentioned on Saturday, I presented a talk on dinosaurs for the K and 1 kids. I included a bunch of photos of fossils with feathers, and showed them what feathered dinosaurs look like. The conclusion was that only some of the dinosaurs died out a long time ago, but some of them – the birds – never died out at all, and are still around us today. They really enjoyed it, so that was good.

With the Year 2 class I did a general Q&A. Some of the questions they asked included:

Besides these three large groups, I also had Science Club with the group of 13 students I’ve been working with all year. It’s really quite a strange thing to be left in charge of 13 kids aged 7 to 10, with no other supervision, and be allowed to do science experiments with them (not on them!). Today I brewed up a pH indicator liquid by mixing hot water and shredded red cabbage. Within half an hour (during which I went over the results of our previous laser experiment), we had a rich purple liquid strained off. I gave each child a plastic cup and one of the chemicals I’d brought in. Then we added the cabbage liquid to each and watched them change colours: 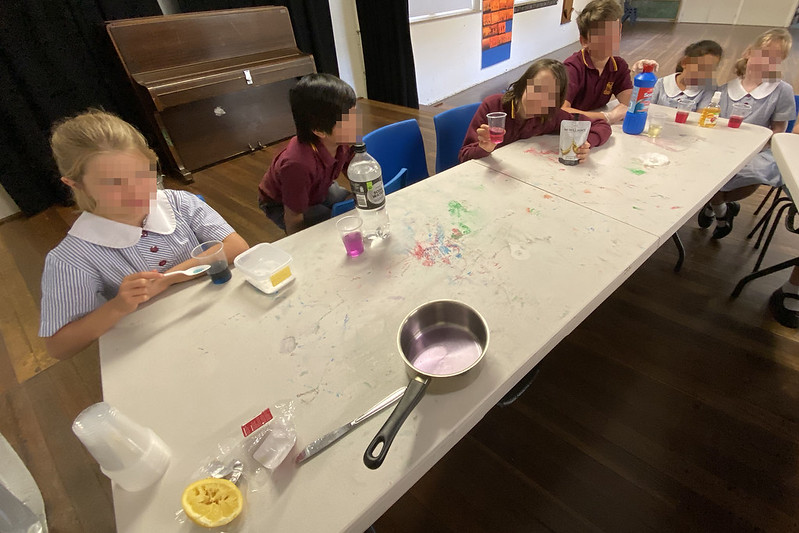 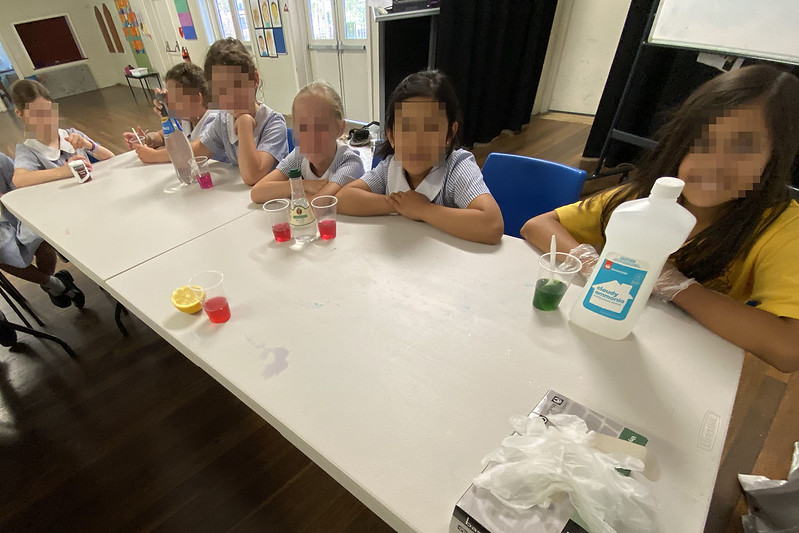 From left to right around the table, the kids had: baking soda, soda water, white wine, bleach, apple juice, cream of tartar, lemonade (i.e. Sprite/7-Up for the Americans), vinegar, lemon juice, and ammonia solution. The bleach and ammonia I gave to the oldest kids, and made them wear rubber gloves for safety. And you can see the different colours they produced. Here’s a shot with them arranged in order of pH: 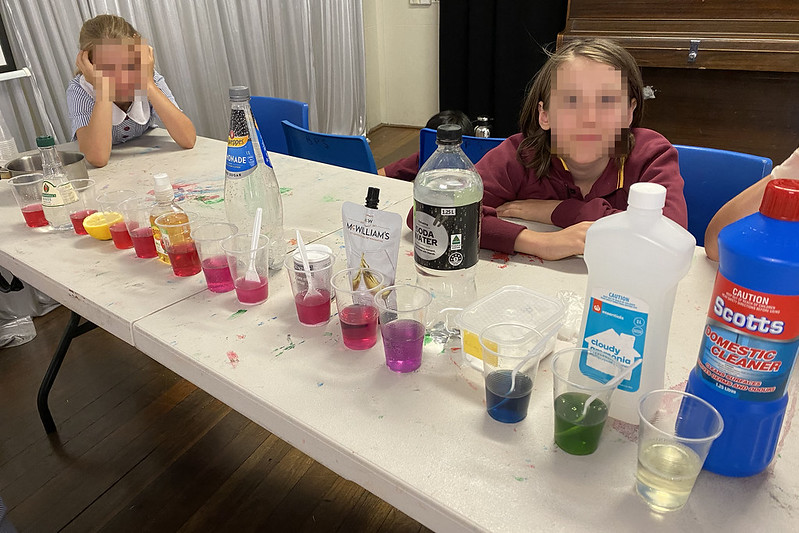 After establishing a sequence of colours for the chemicals, we tried mixing some of them. Adding baking soda to the vinegar made it (1) fizz up, (2) change colour, becoming a deep blue-purple. We mixed a few other things together, and the kids tried to predict the resulting colours (without much success). We established that mixing acids and bases tends to neutralise the result, making it closer to the original neutral purple colour. I made absolutely sure we didn’t mix the ammonia and bleach – I didn’t want to be generating chlorine gas!

This pretty much took up my whole day, as it took a while to drive home in the late afternoon traffic. And I was exhausted! I don’t know how school teachers do this every single day!