Updating Saturday morning because I was busy Friday night. It was a day dedicated to games!

Andrew C. is an experienced golfer, and a few months ago invited me and another friend to try playing a par 3 “pitch and putt” course. We had no experience hitting a golf ball, and it took us a while to start to get the hang of it, but I managed to hit a few half-decent shots (as well as losing two balls). Yesterday Andrew and I went to try the course again. The 18 holes have par 54. Andrew scored 61, while I managed 92 (better than my first effort). I tied one hole with Andrew, and won two holes. My technique is still terrible, but improving! Here’s a photo of one of my best shots of the day. These are our balls after our tee shots on this hole: mine is nearest the hole, Andrew’s is in the foreground. Unfortunately I didn’t sink the putt for a birdie. 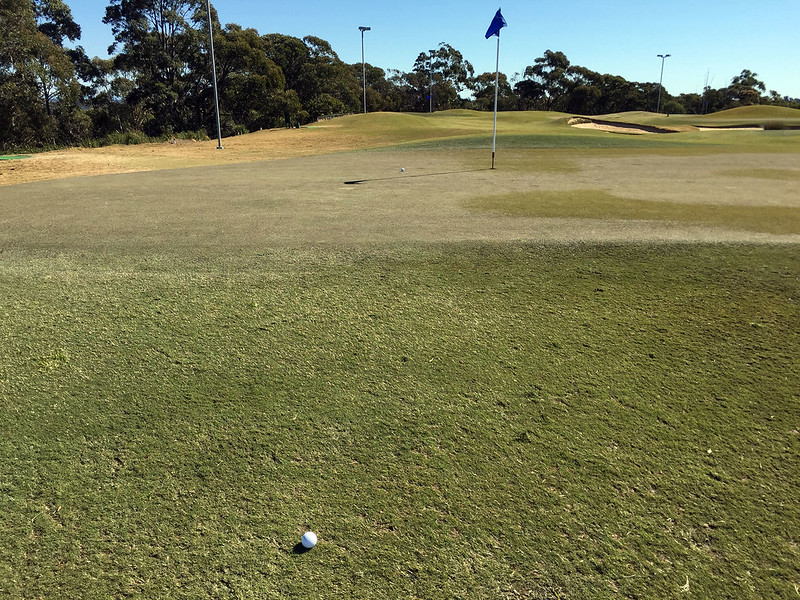 After that we grabbed some lunch at a Japanese place and had a bit of a drive along the beachy coast to head home. All up, a good morning/lunch time. Although it’s still the depths of winter here the day was sunny and warm.

And Friday evening was our fortnightly board games night. We had 5 people, which is a little on the low side, but enough for plenty of games. We started early and had a writing session for Darths & Droids, writing four strips before moving on to the games.

We played a quick game of Ingenious to warm up, then when our host’s daughters arrived home from dance lessons one of them joined us for a game of Junk Art, which was a lot of fun. We liked that one because Steven – who is the most serious game player and strategist and hence who often wins games of strategic skill – needed to use dexterity skills instead, and so most of us beat him!

After the girls went to bed, we started a game of Power Grid, with the Italian map board. I got off to a reasonable start, but by the time we’d estimated the game would finish we were still clearly only about halfway through. It was getting late and I’d promised my wife I’d be home by a certain time, so I had to leave mid-game. The others continued, playing me as a robo-player by making reasonable decisions for me in my absence. And I ended up coming second! So that’s pretty good.